The Call To Stand With

Last Sunday I had the chance to take a late-afternoon walk on a near-perfect, sunny Sunday around a lake with a powerful woman who was quietly making waves amidst the civil rights movement of the 70’s in her home state.

Her name is Billie Burkart, and she is my Grandmother.

Today, she is 90 years old, healthy, beautiful and strong—a fact we are all so proud of and thankful for. She grew up through the Great Depression, and witnessed well so much of the history I only read about. 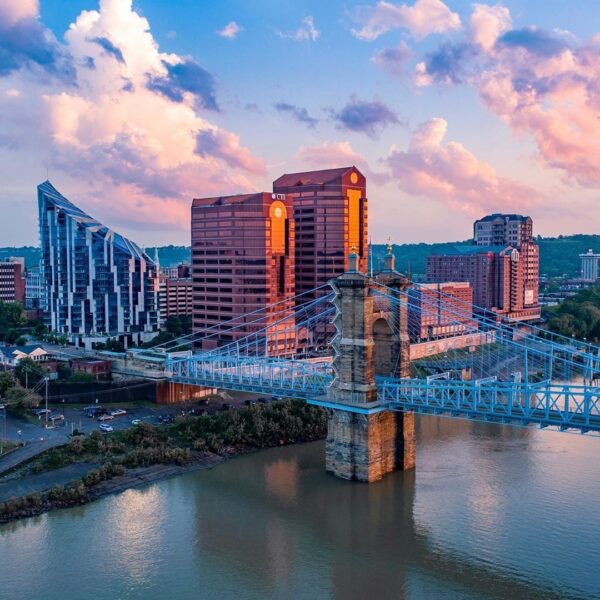 During my Grandmother’s time of service, she and her fellow committee members oversaw the bridge being painted, lighting installed, and our nation’s flag installed on top of the bridge along with the Kentucky and Ohio state flags.

A ceremony was planned in the committee’s honor for the restoration and preservation work they had achieved, and a large, bronze plaque was to be made with their names on it and placed on the face of the bridge as you entered on the Kentucky side.

In a preview to the plaque unveiling, my Grandmother discovered one of the committee member’s names was to be left off. She was an African American woman that had served alongside her. This was blatant discrimination, and my Grandmother was furious.

As the story goes, she went to the powers that be and fought for the wrong to be made right, ensuring that the woman’s name was to appear on the plaque as a committee member just like her own. In the end justice won, and the plaque was placed on the bridge with all the committee members’ names intact. It is still there today. 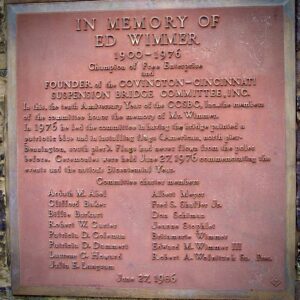 As a family, we have always been so proud of our Grandmother for all that she is and has done. Whenever any of us drive into the Cincinnati, Ohio/Northern Kentucky area, we look at the bridge, in admiration, knowing that our Grandmother’s name is there on that national historical landmark, but I have always been most proud of the story that accompanies it.

And I think this past week, this story rang more true to me than ever. My Grandmother wasn’t trying to win popularity for what she was doing. She didn’t wage a publicity campaign; she just quietly went about using her influence to, as she said, “Make a wrong right,” and because she did, justice prevailed.

It is sad and disgraceful that the situation ever arose, but even though it tried to rise up, it did not win. I don’t know how many more moments of discrimination that African American woman experienced in her life. I am guessing it was not the last, but I know that because of what she pressed through to do and to serve in spite of what she might have experienced and because of what my Grandmother did, her family probably smiles at that same bridge with pride knowing her name is on it too.

As the events of this past week have transpired with the murder of Mr. George Floyd, and the global focus on the necessary ending of racism, I recognize that this is a new moment for my generation.

As my Grandmother’s generation was called to stand up for those being discriminated against, my generation’s calling is to stand with, to stand together, and to say, “That’s not the way we are going to live.”

Racism, in all its forms, is vile, wrong, and fueled by demons, and its root stems out of the kingdom of darkness. It is a mocking spirit sent to destroy unity—our most powerful weapon.

As a generation, we call it out and expose it. We cut it off at its root and refuse to coexist with its presence any longer.

Jesus died for all of us, and there is only one ‘us’ and no ‘them’. The ‘us’ is all those who have fallen short of His righteousness, and have been restored back and made righteous because of what He did. He is our point of reference, and now we have to achieve the kingdom culture here on earth.

As a friend of mine recently said to me while talking about what they are experiencing as African Americans leading in a racially volatile city:

“I will not lose the moment to waging war on the wrong thing. We see through God’s eyes not the eyes of race. This is a demonic attack, and the body of Christ should be aware of it. It starts with the church. The stand is not a stand apart; it is a stand as a whole merely being who we have always said that we are.”

It is time. It is our time. Let’s not hold back and revisit old ways of doing things that have clearly failed, and only served to temporarily bury issues of hate, bitterness, and rage. God created every race in beauty and in strength. One race should never demand that another race bow to it. Our heart toward one another is that we wash one another’s feet, and stand together in strength—to stand together locked arm-in-arm as the body of Christ.

We are not called to bow; we are called to stand as one.

It’s time to lay the ax to the root of what is really trying to operate, which is fear, hate, greed, and deception. We cut it off in Jesus’ name. Let’s move toward a kingdom way of living, seeing and thinking in the light of His truth; we are the body of Christ.

I pray that we take our place in faith, in hope, and in love.

PreviousPrevious post:Building The Permanent In The Temporary
NextNext post:Destined To Dream